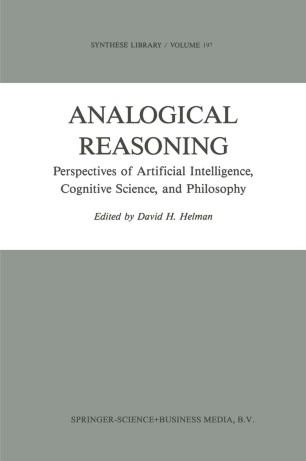 In the last few years, there has been an enormous amount of activity in the study of analogy and metaphor. This is partly because of an interest of artificial intelligence researchers in simulating learning processes using analogy. It also arises from critical examinations of standard theories in the philosophy of language, with their inbuilt literal/meta­ phoric distinction. This volume consists of recent previously unpub­ lished work in this area, with a particular emphasis upon the role of analogies in reasoning and, more generally, their role in thought and language. The papers are contributed by philosophers, computer scientists, cognitive scientists and literary critics. Researchers in these fields whose focus is the study of analogy and metaphor will find much of interest in this volume. These essays can also serve as an introduction to some of the major approaches taken in the investigation of analogy. As noted, this volume brings together the work of researchers in several different disciplines. The various approaches taken with respect to the understanding of analogy tend to be rather different, however, the articles suggest a common conclusion. Analogy and metaphor pervade thought and language; their close investigation thus constitutes a valuable contribution to our understanding of persons. DAVID H. HELMAN Case Western Reserve University vii PART I CONCEPTUAL AND CATEGORICAL THEORIES OF ANALOGICAL UNDERSTANDING MARK TURNER CATEGORIES AND ANALOGIES I want to pursue the following claims: The way we categorize helps explain the way we recognize a statement as an analogy.