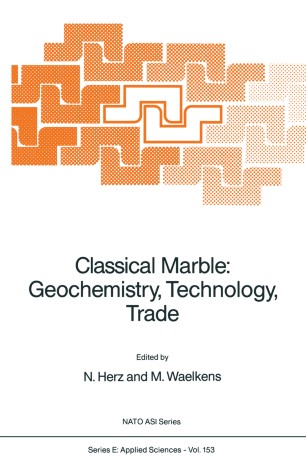 Marble in Ancient Greece and Rome: Geology, Quarries, Commerce, Artifacts Marble remains the sine qua non raw material of the an­ cient Greeks and Romans. Beginning in the Bronze Age sculptu­ re began in marble and throughout classical times the most im­ portant statues, reliefs, monuments and inscriptions were made of it. Yet, quarry sources changed in time as preferences for different marbles were influenced by local traditions, the pos­ sibilities of transport, esthetic tastes, and economics. Marble studies and the identification of the provenance of marble can thus reveal much about Greek and Roman history, trade, esthe­ tics and technology. Persons in many disciplines are studying various aspects of Greek and Roman marble usage. Geologists and geochemists are working on methods to determine the provenance of marble; ar­ chaeologists are noting changing patterns of import and use in excavation~ and discovering how improving quarrying techniques and prelimihary dressing of the extracted material influenced the final shape of artifacts; ancient historians are now under­ standing quarry organization and bureaucracies that controlled marble production and trade; art historians are seeing how phy­ sical characteristics of the stone affected the techniques and style of sculpture; architects and engineers are interested in quarry technologies and usage in building construction. These specialists drawn from many disciplines rarely have an opportu­ nity to compare notes and see how each can contribute to the research effort of others.