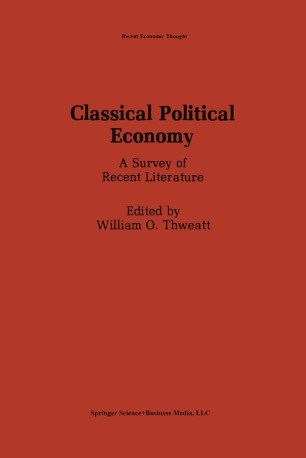 A Survey of Recent Literature

William O. Thweatt This book is the second in three surveys of the literature in the history of economic thought in the Kluwer Recent Economic Thought series. The first book, covering the pre-classical literature, has already been published; a third, on the neo-c1assical period, is planned for 1988. This middle book surveys the writings on classical political economy for the past 30 years, or roughly since the publication of Joseph Schumpeter's 1954 monumental History of Economic Analysis. Shortly after World War II, the American Economic Association spon­ sored a Survey of Contemporary Economics [1949]. That work covered 13 subdisciples of economics, and in 1952 a companion piece appeared in which surveys of 10 additional subdisciples were presented. As Bernard Haley, editor of the second volume, stated, even "though in the two volumes twenty-three fields have been treated ... there remain some aspects of the subject ... that have not been reviewed" [Haley, 1952, p. v].