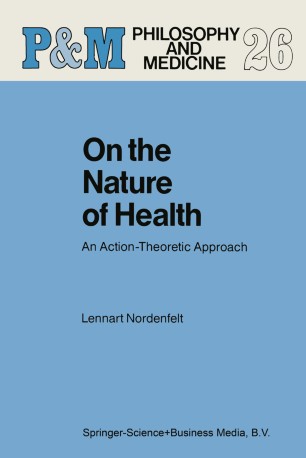 On the Nature of Health

Part of the Philosophy and Medicine book series (PHME, volume 26)

GENERAL INTRODUCTION This study of the concept of health is an attempt to combine central ideas in modern philosophy of medicine with certain results from analytical action theory. What emerges from the study is a concept of health based on an action-theoretic foundation. A person's health is characterized as his ability to achieve his vital goals. The general conception is not new. This study has been inspired by a number of scholars, both ancient and modern. The most important influences from the latter have been those of Georges Canguilhem, H. Tristram Engelhardt Jr. , Caroline Whitbeck and Ingmar Pörn. The novel aspect of this book consists of elaborations made to the general conception. First, the action-theoretic platform is analysed in some detail. The nature of the ability involved, as well as the conditions for having that ability, are specified. Second, the vital goals of man are given considerable attention. Some previous attempts to define such vital goals are analysed and criticized. A new characterization is proposed, in which the vital goals are conceptually linked to the notion of happiness. A person's vital goals are such states of affairs as are necessary and together sufficient for his minimal happiness. Third, a number of consequences of this con­ ception are observed and analysed. One issue which is particularly empha­ sized is that ofwhether the concept ofhealth is a theoretical or a normative concept.