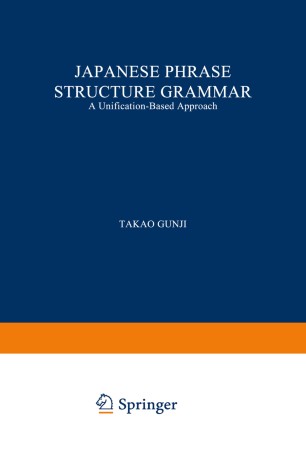 This book is a considerable revision and extension of my thesis for The Ohio State University completed in 1981: A Phrase Structural Analysis of the Japanese Language (Gunji 1981a). The book discusses some of the major grammatical constructions of Japanese in a version of phrase structure grammar called Japanese Phrase Structure Grammar (JPSG), which is loosely based on such frameworks for phrase structure grammar as Generalized Phrase Structure Grammar (GPSG) and Head-driven Phrase Structure Grammar (HPSG). Particular emphasis is placed on the binding and control of pronouns (both implicit - "zero" - and explicit ones, including reflexives) in complementation structures (chapter 4) and adjunction structures (chapter 5). Even though this book started as a revision of my 1981 thesis, the resultant book has few traces of my thinking then. The 1981 thesis was closely related to an early version of GPSG, which was then at a very preliminary stage, and I had only a few preprints of papers by Gerald Gazdar and others to read. GPSG itself has evolved during the past. several years, culminating in a book published last year (Gazdar, Klein, Pullum, and Sag 1985), which differs from the early theory in many ways.