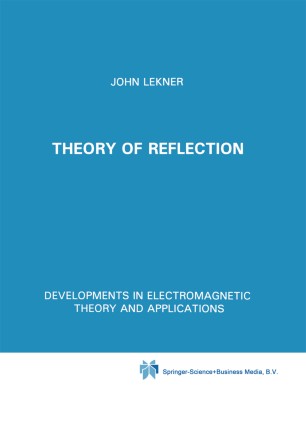 Theory of Reflection of Electromagnetic and Particle Waves

Part of the Developments in Electromagnetic Theory and Applications book series (DETA, volume 3)

This book is written for scientists and engineers whose work involves wave reflec­ tion or transmission. Most of the book is written in the language of electromagnetic theory, but, as the title suggests, many of the results can be applied to particle waves, specifically to those satisfying the Schr6dinger equation. The mathematical connection between electromagnetic s (or TE) waves and quantum particle waves is established in Chapter 1. The main results for s waves are translated into quantum mechanical language in the Appendix. There is also a close analogy between acoustic waves and electromagnetic p (or TM) waves, as shown in Section 1-4. Thus the book, though primarily intended for those working in optics, microwaves and radio, will be of use to physicists, chemists and electrical engineers studying reflection and transmission of particles at potential barriers. The tech­ niques developed here can also be used by those working in acoustics, ocean­ ography and seismology. Chapter 1 is recommended for all readers: it introduces reflection phenomena, defines the notation, and previews (in Section 1-6) the contents of the rest of the book. This preview will not be duplicated here. We note only that applied topics do appear: two examples are the important phenomenon of attenuated total reflection in Chapter 8, and the reflectivity of multilayer dielectric mirrors in Chapter 12. The subject matter is restricted to linear classical electrodynamics in non-magnetic media, and the corresponding particle analogues.