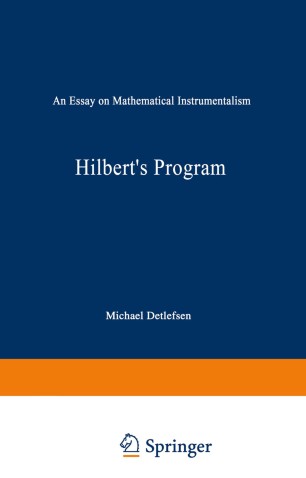 An Essay on Mathematical Instrumentalism

Hilbert's Program was founded on a concern for the phenomenon of paradox in mathematics. To Hilbert, the paradoxes, which are at once both absurd and irresistible, revealed a deep philosophical truth: namely, that there is a discrepancy between the laws accord­ ing to which the mind of homo mathematicus works, and the laws governing objective mathematical fact. Mathematical epistemology is, therefore, to be seen as a struggle between a mind that naturally works in one way and a reality that works in another. Knowledge occurs when the two cooperate. Conceived in this way, there are two basic alternatives for mathematical epistemology: a skeptical position which maintains either that mind and reality seldom or never come to agreement, or that we have no very reliable way of telling when they do; and a non-skeptical position which holds that there is significant agree­ ment between mind and reality, and that their potential discrepan­ cies can be detected, avoided, and thus kept in check. Of these two, Hilbert clearly embraced the latter, and proposed a program designed to vindicate the epistemological riches represented by our natural, if non-literal, ways of thinking. Brouwer, on the other hand, opted for a position closer (in Hilbert's opinion) to that of the skeptic. Having decided that epistemological purity could come only through sacrifice, he turned his back on his classical heritage to accept a higher calling.

`The book is well written and recommended reading for everyone interested in the philosophical dimensions of technical results from foundations of mathematics and pure logic.'
S. Gottwald, Zentralblatt für Mathematik und ihre Grenzgebiete, Vol. 641.
Buy options