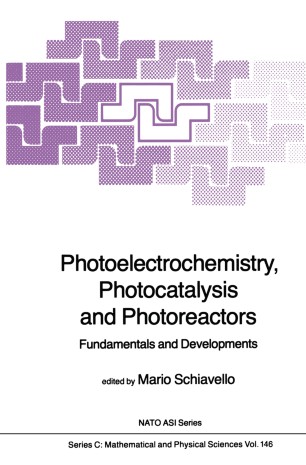 This book collects the lectures delivered by the Authors during the NATO ASI "Fundamentals and Developments of Photocatalytic and Photoelectrochemical Processes", held in Erice (Trapani, Italy) from May 20th to June 2nd 1984. The ASI was devoted to the general field of photochemical conversion and storage of solar energy. It had the aim of defining the "state of art" and of outlining perspectives, lines of development and practic al utilization of this form of energy. The world energy crisis has stimulated scientists to investigate new routes for finding and testing methods and processes for obtaining renewable and cheap sources of energy. Within this framework, the possibility of solar energy utilization on a large scale must overcome the stage of discovering efficient processes for the photochemical conversion and for the storage. The most promising way for achieving this goal seems the photosplitting of water and related reactions. The methods for obtaining the water photosplitting are essentially based on photoelectrochemical cells and on photocatalytic systems (gas-solid and gas-liquid-solid). Extensive research work is currently done all over the world both in universities and in industrial laboratories in these areas. The ASI has given to the audience a general view of the fundamental aspects and as much as possible a detailed insight of the various methods and processes. A section has been also devoted to the photoreactors, a field in which the interest is ix x FOREWORD steadily increasing and whose development is essential for the practical exploitation of the various methods.