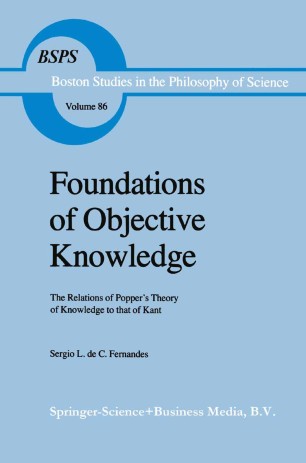 Part of the Boston Studies in the Philosophy of Science book series (BSPS, volume 86)

Kant and Popper. The affmity between the philosophy of Kant and the philosophy of Karl Popper has often been noted, and most decisively in Popper's own reflections on his thought. But in this work before us, Sergio Fernandes has given a cogent, comprehensive, and challenging investigation of Kant which differs from what we may call Popper's Kant while nevertheless showing Kant as very much a precursor of Popper. The investigation is directly conceptual, although Fernandes has also contributed to a novel historical understanding of Kant in his reinterpretation; the novelty is the genuine result of meticulous study of texts and commentators, characterized by the author's thorough command of the epistemological issues in the philosophy of science in the 20th century as much as by his mastery of the Kantian themes of the 18th. Naturally, we may wish to understand whether Kant is relevant to Popper's philosophy of knowledge, how Popper has understood Kant, and to what extent the Popperian Kant has systematically or historically been of influence on later philosophy of science, as seen by Popper or not.