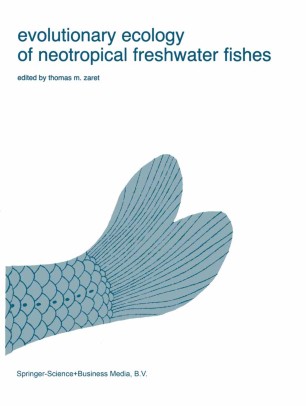 Part of the Developments in environmental biology of fishes book series (DEBF, volume 3)

In August of 1980, near the whistlestop of Maltby, Surely, we would plead, the U. S. A. , a wealthy Washington, Don Stewart and I met in my rented nation,can fund our proposal if only as a gesture of house trailer to sketch a proposal to the National support to foreign scientists. Somehow, however, Science Foundation. Our goal was simple: to re­ we seemed to miss deadlines, fall in-between the quest from the Foundation air fare and per diem for cracks, and miss the right connections. It was not approximately 20 Latin American scientists to at­ until May, 1982, several weeks before the proposed tend a workshop entitled the 'Systematics and workshop, that we realized we could not find any Evolutionary Ecology of Neotropical Freshwater funds for bringing Latin American scientists to the Fishes' that would follow the 1982 ASIH (Ameri­ U. S. The programs for the meeting had been can Society of Ichthyologists and Herpetologists) printed, the meal coupons, banquet tickets, and all meeting. We had presented an initial outline for our the other amenities that come with a professional proposal to a number ofcolleagues in . June of 1980 meeting were ready, but we had no Latin American at the ASIH meeting at Texas Christian University ichthyologists as participants. Some abstracts were in Fort Worth, Texas. The steering committee for being received by the program organizers, but the workshop, consisting of a dozen senior scien­ without U. S.