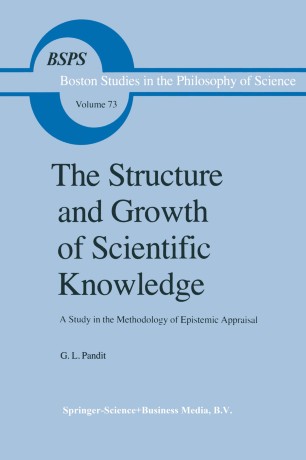 A Study in the Methodology of Epistemic Appraisal

Part of the Boston Studies in the Philosophy of Science book series (BSPS, volume 73)

Professor Pandit, working among the admirable group of philosophers at the University of Delhi, has written a fundamental criticism and a constructive re-interpretation of all that has been preserved as serious epistemological and methodological reflections on the sciences in modern Western philosoph- from the times of Galileo, Newton, Descartes and Leibniz to those of Russell and Wittgenstein, Carnap and Popper, and, we need hardly add, onward to the troubling relativisms and reconstructions of historical epistemologies in the works of Hanson, Kuhn, Lakatos and Feyerabend. His themes are intrigu­ ing, set forth as they are with masterly case studies of physics and the life sciences, and within an original conceptual framework for philosophical analysis of the processes, functions, and structures of scientific knowing. Pandit's contributions deserve thoughtful examination. For our part, we wish to point to some among them: (1) an interactive articulation of subjective and objective factors of both problems and theories in the course of scientific development; (2) a striking contrast between the explanatory power of a scientific theory and its 'resolving power', i. e.