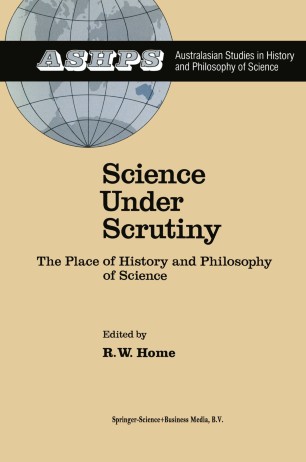 The Place of History and Philosophy of Science

Part of the Australasian Studies in History and Philosophy of Science book series (AUST, volume 3)

Only in fairly recent years has History and Philosophy of Science been recognized - though not always under that name - as a distinct field of scholarly endeavour. Previously, in the Australasian region as elsewhere, those few individuals working within this broad area of inquiry found their base, both intellectually and socially, where they could. In fact, the institutionali­ zation of History and Philosophy of Science began comparatively early in Australia. An initial lecturing appointment was made at the University of Melbourne immediately after the Second World War, in 1946, and other appointments followed as the subject underwent an expansion during the 1950s and '60s similar to that which took place in other parts of the world. Today there are major Departments at the University of Melbourne, the University of New South Wales and the University of Wollongong, and smaller groups active in many other parts of Australia, and in New Zealand.

`In conclusion, this collection of essays is interesting to read, intellectually stimulating and thougt provoking, comprehensive in scope (including historical examples from physics, sociology, economics, etc.), yet specific in addressing the pedagogical questions concerning sudies in the history and philosophy of science. ...it could become a provocative standard introductory text for teachers and students interested in the natural as well as the social sciences.'
Journal of the History of the Behavioral Sciences (July 1985)