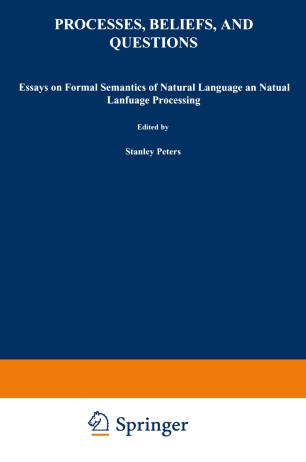 SECTION I In 1972, Donald Davison and Gilbert Hannan wrote in the introduction to the volume Semantics of Natural Language: "The success of linguistics in treating natural languages as formal ~yntactic systems has aroused the interest of a number of linguists in a parallel or related development of semantics. For the most part quite independently, many philosophers and logicians have recently been applying formal semantic methods to structures increasingly like natural languages. While differences in training, method and vocabulary tend to veil the fact, philosophers and linguists are converging, it seems, on a common set of interrelated problems. " Davidson and Harman called for an interdisciplinary dialogue of linguists, philosophers and logicians on the semantics of natural language, and during the last ten years such an enterprise has proved extremely fruitful. Thanks to the cooperative effort in these several fields, the last decade has brought about striking progress in our understanding of the semantics of natural language. This work on semantics has typically paid little attention to psychological aspects of meaning. Thus, psychologists or computer scientists working on artificial intelligence were not invited to join the forces in the influential introduction of Semantics of Natural Language. No doubt it was felt that while psychological aspects of language are important in their own right, they are not relevant to our immediate semantic concerns. In the last few years, several linguists and logicians have come to question the fundamental anti-psychological assumptions underlying their theorizing.