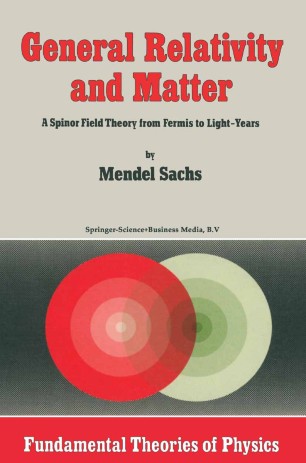 A Spinor Field Theory from Fermis to Light-Years

There exist essentially two levels of investigation in theoretical physics. One is primarily descriptive, concentrating as it does on useful phenomenological approaches toward the most economical classifications of large classes of experimental data on particular phenomena. The other, whose thrust is explanatory, has as its aim the formulation of those underlying hypotheses and their mathematical representations that are capable of furnishing, via deductive analysis, predictions - constituting the particulars of universals (the asserted laws)- about the phenomena under consideration. The two principal disciplines of contemporary theoretical physics - quantum theory and the theory of relativity - fall basically into these respective categories. General Relativity and Matter represents a bold attempt by its author to formulate, in as transparent and complete a way as possible, a fundamental theory of matter rooted in the theory of relativity - where the latter is viewed as providing an explanatory level of understanding for probing the fundamental nature ofmatter indomainsranging all the way fromfermis and lessto light years and more. We hasten to add that this assertion is not meant to imply that the author pretends with his theory to encompass all ofphysics or even a tiny part of the complete objective understanding of our accessible universe. But he does adopt the philosophy that underlying all natural phenomena there is a common conceptualbasis,and then proceeds to investigate how far such a unified viewcan take us at its present stage of development.

`...to read it should be a rewarding experience for anyone who is concerned with understanding the most fundamental features of the physicist's world view. ...well written and contains some very useful material on both the conceptual and technical aspects of relativity.' Foundations of Physics, 15 (1985)