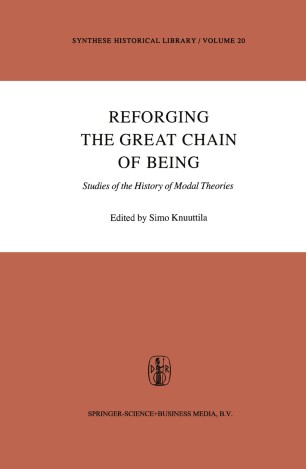 Reforging the Great Chain of Being

Studies of the History of Modal Theories

A sports reporter might say that in a competition all the participants realize their potentialities or possibilities. When an athlete performs far below his usual standard, it can be said that it was possible for him to do better. But the idea of fair play requires that this use of 'possible' refers to another com­ petition. It is presumed that the best athlete wins and that no real possibility of doing better is left unrealized in a competition. Here we have a use of language, a language game, in which modal notions are used so as to imply that if something is possible, it is realized. This idea does not belong to the general presuppositions of current ordinary usage. It is, nevertheless, not difficult to fmd other similar examples outside of the language of sports. It may be that such a use of modal notions is sometimes calculated to express that in the context in question there are no real alternative courses of events in contradistinction to other cases in which some possible alternatives remain unrealized. Even though modal notions are currently interpreted without the presup­ position that each genuine possibility should be realized at some moment of the actual history, there are contemporary philosophical models of modalities which incorporate this presupposition. In his book Untersuchungen tiber den Modalkalkiil (Anton Hain, Meisenheim am Glan 1952, pp. 16-36), Oscar Becker presents a statistical interpretation of modal calculi.