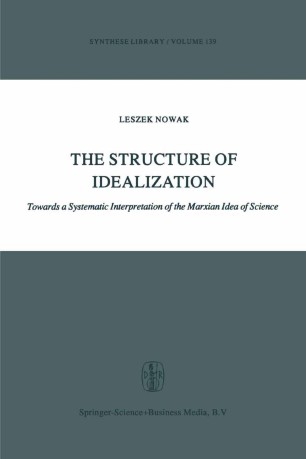 The Structure of Idealization

Towards a Systematic Interpretation of the Marxian Idea of Science

Much is said in Marxist literature about Marxist methodology which is supposed to be entirely original - differing a great deal from all other trends in the modern philosophy of science. On the other hand, however, it is unfallacious to state that there are no people outside Marxism who would like to deny this statement. This has to put those who really believe that Marxism has something important to say in philosophy of science on guard: if someone says something important others usually are inclined to protest. But who is inclined to protest when it is stated that Marx em­ ployed both induction and deduction, a historical method and a logical one as well, synthesis, but also analysis, etc? Who is inclined to protest when it is not known what within this framework 'induction', 'deduction' 'history' or 'logic' mean? Who is inclined to protest when 'Marxist meth­ odology' is presented not with the aid of precise definitions and clear hypotheses but with the aid of a jungle of quotations? I think that the main malfeasance of the current 'Marxist methodology', is that of ecclecticism. The methodology of Marx is presented as a col­ lection of trivial and/or obscure ideas but not as a system of statements subordinated to any clear, definite viewpoint presenting a new grasp ofthe nature of scientific cognition. Search for reconstruction of Marxian meth­ odology as a system of the kind is the main aim of this book.