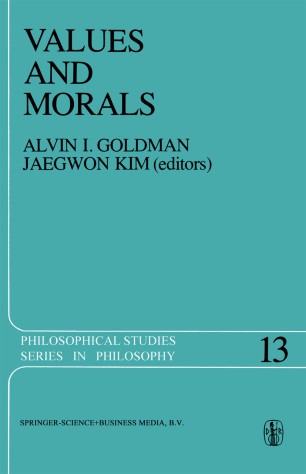 This Festschrift seeks to honor three highly distinguished scholars in the Department of Philosophy, University of Michigan: William K. Frankena, Charles L. Stevenson, and Richard B. Brandt. Each has made significant con­ tributions to the philosophic literature, particularly in the field of ethics. Michigan has been fortunate in having three such original and productive moral philosophers serving ob its faculty simultaneously. Yet they stand in a long tradition of excellence, both within the Department and in the University. Let us trace that tradition briefly. The University of Michigan opened in 184l.lts Department of Literature, Science, and the Arts at first resembled a typical American college ofthat period, with religious and ethical indoctrination playing a central role in course offerings. But when Henry Tappan, a Presbyterian clergyman and Professor of philosophy, became President in 1852, he succeeded in shifting the emphasis from indoctrination to inquiry and scholarship. Though he was dismissed for his policies in 1863, Tappan's efforts to establish a broad and liberal curriculum prevailed. Michigan was to take its place among the leading educational institutions in this country, and to achieve an international reputation as a research center. Several past philosophers are worthy of mention here. George Sylvester Morris, an absolute idealist, joined the Department in 1881, having served from 1870 as Chairman of the Department of Modern Languages and Literature. He assumed the Chairmanship of Philosophy in 1884.