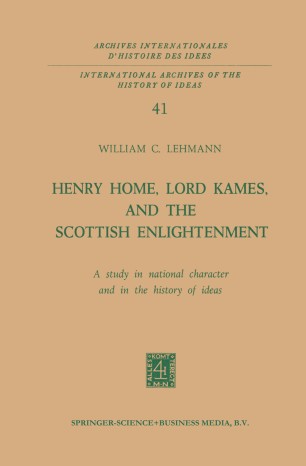 Henry Home, Lord Kames, and the Scottish Enlightenment: A Study in National Character and in the History of Ideas

The purpose of the present study is to present the life and work and thought of a remarkable pioneering figure on the Scottish scene over the middle half, broadly, of the eighteenth century, in their dynamic relations with that most extraordinary intellectual awakening and scientific, edu­ cational, literary and religious development of his time generally known as the "Scottish Enlightenment. " That movement in thought and culture was indeed in more ways than one a unique phenomenon in the history of western culture, comparable, in its own manner and measure, as we shall attempt to point out later, with such history-making movements or epochs as the Age of Pericles in Greece, the Augustan Age in Rome, the Renaissance movement in Italy and Western Europe generally, the up-surge both in science and in letters in England in the seventeenth century, and the contemporary movement in France associated with the Encyclopedists. This Scottish Enlightenment, often also spoken of as the "Awakening of Scotland," was of course more than a movement merely on the intel­ lectual and cultural level. It had also political bearings and was rather directly conditioned by events and changes in the political arena, begin­ ning with the Union with England in 1707; and even more directly was it accompanied and conditioned by social and economic changes which were in a short span of time to transform the face of this far-northern country almost beyond recognition.