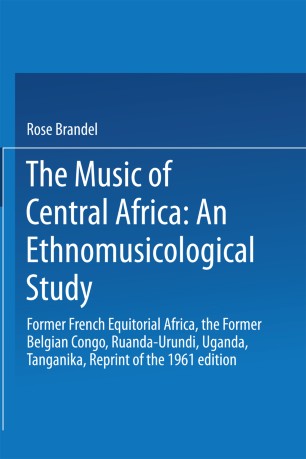 The Music of Central Africa: An Ethnomusicological Study

Under the inspiring guidance of my mentor, Curt Sachs, this work was conceived, planned, and executed. It gained in dimension under the acute and patient perusal of Gustave Reese to whose brilliant propensity for clarity of thought and of style lowe a huge debt. Furthermore, the helpful suggestions made by Martin Bernstein and by Jan LaRue are gratefully acknowledged. If Jaap Kunst had not kindly gone to the trouble of ordering, supervising the con­ struction of, and mailing to me from Amsterdam his personally designed monochord, an important section of this work could not have taken form. This preface is not complete, of course, without final thanks to my husband, Harvey B. N atanson, for his sustained interest and encouragement. R. B. Note As the present work goes to press, the political map of Africa is flowing into a new mold. Several countries have obtained independence, and new names and data should be con­ sidered: French Equatorial Africa has become (November 28-December I, 1958) four independent countries - Republic of the Congo: Brazzaville (formerly Middle Congo), Gabon Republic (formerly Gabon), Central African Republic (formerly Ubangi-Shari), and Republic of Chad (formerly Chad). The Belgian Congo has become (June 30, 1960) the Republic of the Congo: Leopoldville.