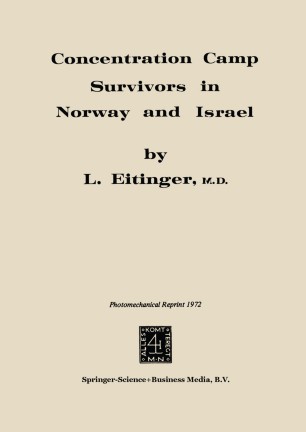 The general background of the groups investigated The purpose of this paper is to examine whether the severe psychic and physical stress situations to which human beings were exposed in the concentration camps of World \Var II have had lasting psychological results, to discover the nature of these conditions and the symptomatology they present, and finally to investigate which detailed factors of the above-mentioned stress situation can be con­ sidered decisive for the morbid conditions which were revealed. In order to elucidate these questions from different points of view, I have examined groups of former concentration camp inmates both in Norway and Israel. The Norwegians who were examined compose a fairly uniform group of men and women, born and bred in Norway, who after the War naturally returned to their native country. The Israeli groups which were examined were drawn from almost every country in Europe that had been under German occupation during World War II. They had all immigrated into Israel, mostly after 1948.