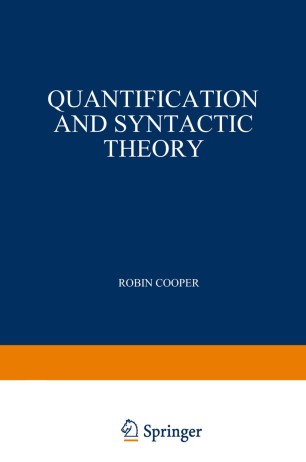 The format of this book is unusual, especially for a book about linguistics. The book is meant primarily as a research monograph aimed at linguists who have some background in formal semantics, e. g. Montague Grammar. However, I have two other audiences in mind. Linguists who have little or no experience of formal semantics, but who have worked through a basic mathematics for linguists course (e. g. using Wall, 1972, or Partee, 1978), should, perhaps with the help of a sympathetic Montague gramma­ rian, be able to discover enough of how I have adapted some of the basic ideas in formal semantics to make the developments that I undertake in the rest of the book accessible. Logicians and computer scientists who know about model theoretic semantics and formal systems should be able to glean enough from Chapters I and II about linguistic concerns and techniques to be able to read the remainder of the book, again possibly with the help of a sympathetic Montague grammarian. However, readers should beware. Chapter II is not meant as a general introduction either to formal semantics or to linguistics and while much of the presentation there is going over ground that is already well covered in the literature, the particular formulation and the emphases are very much oriented to the developments to be undertaken later in the book.

`...C's book is an important document for students of natural language quantification, and of the relation of the syntax and semantics of natural language more generally. It leads us to consider an important foundational issue, namely, whether scope and binding are properties of syntactic or semantic descriptions. Cooper's theory illustrates some of the consequences of one, but not the only, answer to this question. As such it is a significant and stimulating contribution to the literature on natural language semantics.'
Language, 62:4 (1986)
Buy options