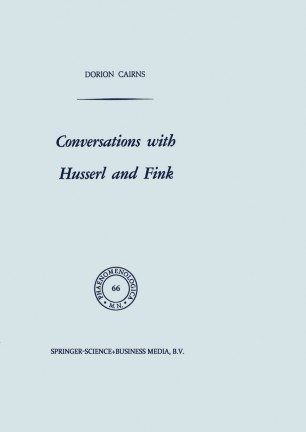 Conversations with Husserl and Fink

This is an unusual volume. During his periods of study with Ed­ mund Husserl - first from I924 1. 0 I926, then from I93I to I932 - Dorion Cairns had become imnlensely impressed with the stri­ king philosophical quality of Husserl's conversations with his students and co-workers. Not unlike his daily writing (five to six hours a day was not uncommon, as Husserl reports herein, the nature of which was a continuous searching, reassessing, modi­ fying, advancing and even rejecting of former views), Husserl's conversations, especially evidenced from Cairns's record, were remarkable for their depth and probing character. Because of this, and because of the importaIlt light they threw on Husserl's written and published works, Cairns had early resolved to set down in writing, as accurately as possible, the details of these conversations. Largely prompted by the questions and concerns of his students, including Cairns, the present Conversations (from the second period, I93I-I932, except for the initial conversation) provide a significant, intriguing, and always fascinating insight into both the issues which were prominent to Husserl at this time, and the way he had come to view the systematic and historical placement of his own earlier studies. Cairns had often insisted - principally in his remarkable lec­ 1 tures at the Graduate Faculty of the New School - that attaining a fair and accurate view of Husserl's enormously rich and complex 1 Cairns's lectures between 1956 and 1964 are especially important.