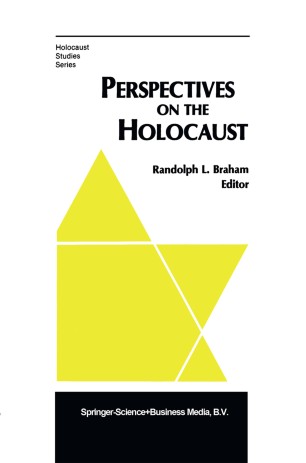 Perspectives on the Holocaust

The number of books and articles dealing with various aspects of World War II has increased at a phenomenal rate since the end of the hostilities. Perhaps no other chapter in this bloodiest of all wars has received as much attention as the Holo­ caust. The Nazis' program for the "Final Solution of the Jewish Question" - this ideologically conceived, diabolical plan for the physicalliquidation of European Jewry - has emerged as a subject of agonizing and intense interest to laypersons and scholars alike. The centrality of the Holocaust in the study of the Third Reich and the Nazi phenomenon is almost universally recognized. The source materials for many of the books published during the immediate postwar period were the notes and diaries kept by many camp and ghetto dwellers, who were sustained during their unbelievable ordeal by the unusual drive to bear witness. These were supplemented after the liberation by a large number of personal narratives collected from survivors alI over Europe. Understandably, the books published shortly after the war ended were mainly martyrological and lachrymological, reflecting the trauma of the Holocaust at the personal, individual level. These were soon followed by a considerable number of books dealing with the moral and religious questions revolving around the role ofthe lay and spiritual leaders of the doomed Jewish communities, especially those involved in the Jewish Councils, as well as God' s responsibility toward the "chosen people.