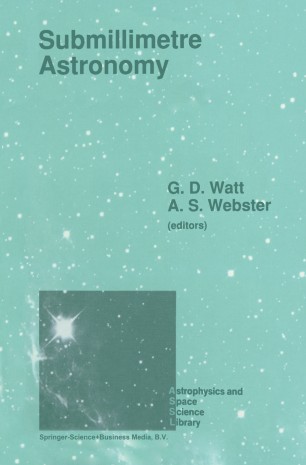 Proceedings of the Kona Symposium on Millimetre and Submillimetre Astronomy, Held at Kona, Hawaii, October 3–6, 1988

G. M. Bernstein, M. L. Fischer, and P. L. Richards Department of Physics, University of California Berkeley, California 94720, U. S. A. J. B. Peterson Department of Physics, Princeton University Princeton, New Jersey 08540, U. S. A. T. Timusk Department of Physics, McMaster University Hamilton, Ontario L8S 4M1 , Canada ABSTRACT. Recent measurements of the diffuse background at millimeter wavelengths indicate no departure from a Planck spectrum near the peak of the blackbody curve. Anisotropy measurements indicate no structure, at the 2% level, in the recently detected submillimeter excess. We report here the results of an April 1987 balloon flight of an instrument designed to measure the spectrum of the cosmic background radiation from 1 mm to 3 mm. A description of the instrument can be found in Peterson, Richards, and Timusk (1985). Modifications were made to the apparatus and experimental procedure in order to identify and reduce systematic errors. Results from the latest flight indicate that two effects hamper the interpretation of the data. These systematic effects will be described in detail in a forthcoming publications; they are probably responsible for the non-Planckian spectrum measured by Woody and Richards (1981). Attempts to remove the systematic effects from our data yield the upper limits to the CBR brightness temperature in 4 bands from 1 mm to 3 mm. There is no evidence for an excess of radiation near the 2. 8 K blackbody peak.