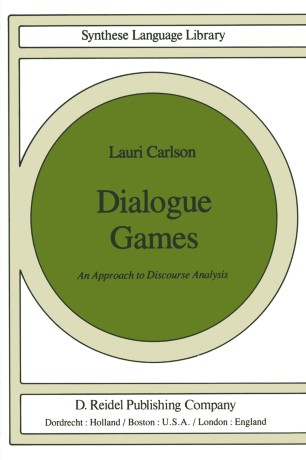 An Approach to Discourse Analysis

This essay constitutes yet another approach to the fields of inquiry variously known as discourse analysis, discourse grammar, text grammar, functional 1 syntax, or text linguistics. An attempt is made to develop a fairly abstract unified theoretical frame­ work for the description of discourse which actually helps explain concrete facts of the discourse grammar of a naturallanguage.2 This plan is reflected in the division of the study into two parts. In the first part, a semiformal framework for describing conversational discourse is developed in some detail. In the second part, this framework is applied to the functional syntax of English. The relation of the discourse grammar of Part II to the descriptive frame­ work of Part I can be instructively compared to the relation of Tarskian semantics to model theory. Tarski's semantics defmes a concept of truth of a sentence in a model, an independently identified construct. Analogously, my rules of discourse grammar defme a concept of appropriateness of a sentence to a given context. The task of the first Part of the essay is to characterize the relevant notion of context. Although my original statement of the problem was linguistic - how to describe the meaning, or function, of certain aspects of word order and intonation - Part I is largely an application of various methods and results of philosophical logic. The justification of the interdisciplinary approach is the simplicity and naturalness of the eventual answers to specific linguistic problems in Part II.

`...the book belongs to the most important publications on discourse structure, since it brings an overwhelming number of important insights in the most different domains of text linguistics, many of them helping to reveal points of a deeper understanding of conversational regularities, as well as of the relationships between sentences, contexts and truth conditions.'
The Prague Bulletin of Mathematical Linguistics, 44 (1985)
Buy options