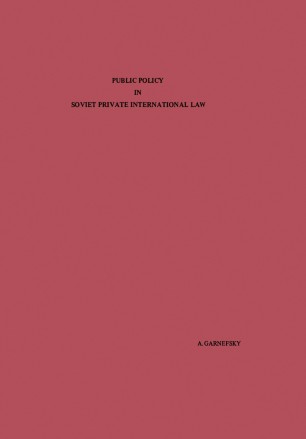 This study is based on original Russian sources, due atten­ tion being paid to some authoritative views advanced by foreign lawyers. Leaving aside the essentials of the work in the hope that they will speak for themselves; I should like to make some prelim­ inary remarks regarding the linguistic and other formal aspects. First of all it should be noted that many of the Soviet laws have already been translated into English either in the USSR itself or in Western countries. This fact is fully reflected in the bibliographical survey at the end of this study. Some laws have been translated both in the Soviet Union and abroad, as for instance the Fundamentals of Soviet Civil Legislation. In such a case I have used the translation made in the USSR even though linguistically it may be inferior to the translation made in the West. The author has translated only those legal provi­ sions of which no English translation was available. For transliteration, I have used the system of the Library of Congress of the USA without its diacritical marks. Further, a word should be said about the references in the notes. They are very brief and consist of the surnames of the authors concerned and if necessary an additional element, e. g.