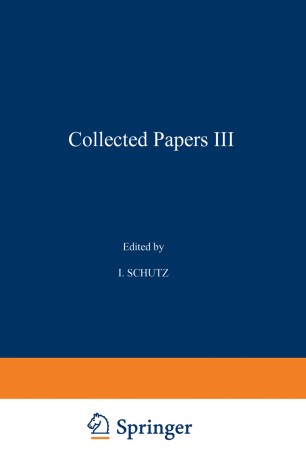 Alfred Schutz devoted his life to a clarification of the foun­ dations of the social sciences. His first formulation of the perti­ nent problems is contained in DER SINNHAFTE AUFBAu DER SOZIALEN WELT, EINE EINLEITUNG IN DIE VERSTEHENDE SOZIOLOGIE, now available in a second unrevised German edition with an English translation in preparation. Since I932, the date of this work, Alfred Schutz pursued painstaking and detailed investigations of issues which arose in connection with his early endeavors. These investigations were originally published as a series of essays and monographs over a period of about twenty years and are now assembled in the COLLECTED PAPERS of which this is the third and final volume. They form a unitary whole insofar as a common core of problems and theoretical ideas is presented from varying perspectives. Together DER SINNHAFTE AUFBAu DER SOZIALEN WELT and the three volumes of COL­ LECTED PAPERS set forth a comprehensive and consistent theory of the world of everyday life as the reality with which the social sciences are essentially concerned. Alfred Schutz was preparing a systematic presentation of his theory and of the results of his investigations into the struc­ tures of the world of everyday life when death overtook him. The manuscript containing the final statement of his philosophical and sociological thinking was not completely ready for publi­ cation at the time of his death. It is now being brought into book form by Professor Thomas Luckmann, one of his former students.