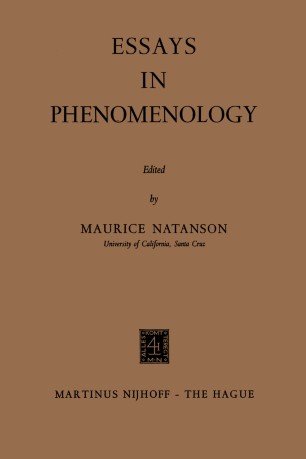 Fifteen years ago, Dorion Cairns concluded an article on phenome­ nology with a cautious appraisal of its influence in America. "Thus far," he wrote, "it continues to be an exotic. " The situation today has changed: translations of the writings of Husserl, Heidegger, Marcel, Sartre, and Merleau-Ponty have appeared, and commentaries on these and related thinkers are not uncommon. Moreover, discussion of phenomenological problems is increasingly becoming part of the American (if not the British) philosophical scene. Phenomenology is in danger of domestication! Signs of its accommodation include a willingness to pay tribute to HusserI's Logical Investigations by those who find relatively little to interest them in his later work, a location of what are taken to be common themes and underlying convergences of emphasis in Continental phenomenology and Anglo-American philosophy of the more nearly Wittgensteinian and Austinian varieties, and a growing impatience (shared by some phenomenologists) with expositions, explications, and interpretations of Husserl's work at the expense of original applications of phenomenology. Most bluntly put, the attitude is: Don't talk about it; do it! It would seem that we have arrived at a point where introductions to phenomenology are of doubt­ ful value, if not superfluous. The present collection of essays is based on different assumptions and points to an alternative conception of the role of both methodology and originality in phenomenological work.