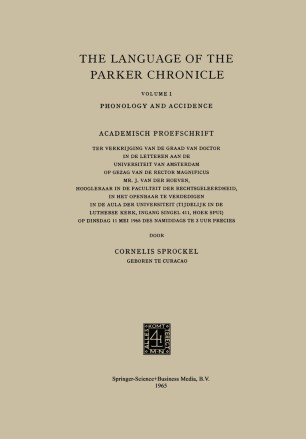 The Language of the Parker Chronicle

That the history of England between the death of Bede and the Norman Conquest could hardly have been written at aU but for the annalistic compilations comprehensively labelled the Anglo-Saxon Chronicle has more than once been pointed out, and the information contained in them has been made accessible to historians in a number of editions and translations by scholars from Benjamin Thorpe in 1861 to Dorothy Whitelock in our own time. That the Chronicle also affords invaluable evidence for the development of the English language, since it was almost entirely written in the vernacular, has less often been emphasized. Now, there cannot be any doubt that from this point of view the most important of its versions is the Parker Chronicle, since it is the oldest, and was written down over a period of close on two centuries. It is, therefore, surprising that this primary source of documentary evidence for the development of Old English has received so little attention since Cosijn published his Altwestsiichsische Grammatik more than three quarters of a century ago. In view of this neglect, I think I may assume that a work dealing solely with the linguistic aspect of this important document will meet a need.