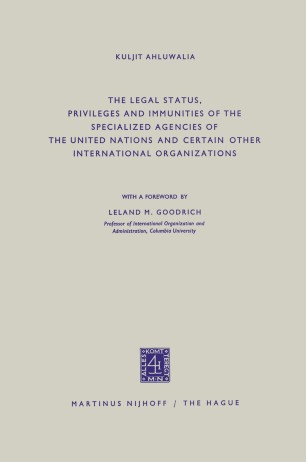 The Legal Status, Privileges and Immunities of the Specialized Agencies of the United Nations and Certain Other International Organizations

The past century has been a period of revolutionary change in many fields of human activity, in institutions and in thought. This period has seen the need of adjustment of state institutions and legal concepts to the needs of greater international cooperation. During the half­ century preceding the First World War, cooperation by governments outside the traditional diplomatic channels and procedures was largely limited to highly technical organizations, commonly referred to as public international unions, dealing with such matters as the im­ provement of postal communications and the control of contagious diseases. With the establishment of the League of Nations and the International Labor Organization at the end of the First World War, organized international cooperation assumed greater importance and the need was recognized of giving to the instruments of such cooper­ ation legal status and rights which would facilitate the effective performance of their functions. This proved to be a difficult adjustment for legal theory to make since the enjoyment of special privileges and immunities had been based in traditional international law on the fiction of state sovereignty. The new international organizations, while performing functions of the kind performed by national govern­ ments, were far from possessing the powers of such governments. The failure of the League of Nations to achieve its major purpose did not signify any permanent decline in the role of organized inter­ national cooperation.