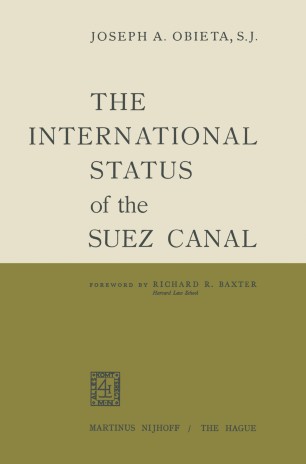 The International Status of the Suez Canal

At the turn of the century, a definitive history of the Suez Canal by Charles-Roux, L'Isthme et le Canal de Suez, listed in its bibliogra­ phy 1499 items on this major interoceanic waterway. A conservative estimate would probably set at double, treble, or quadruple this number the notes and studies on the Suez Canal which have been published since 1901. A word of explanation about a further work on the Canal may therefore be called for. Throughout its history the Suez Canal has been the focus of con­ troversy and conflict, arising out of attempts to control this crucial point on the sea passage linking Europe with the east coast of Africa, India, the Far East and Australasia. Much of this troubled history yields more readily to political than to legal analysis. The most important single legal question about the Canal concerns the dimen­ sions of the right of free passage. That question has become of grave concern to the entire world community only with the war between the Arab States and Israel and the short-lived conflict of 1956-57 between France, Great Britain, and Israel on the one hand and Egypt on the other.