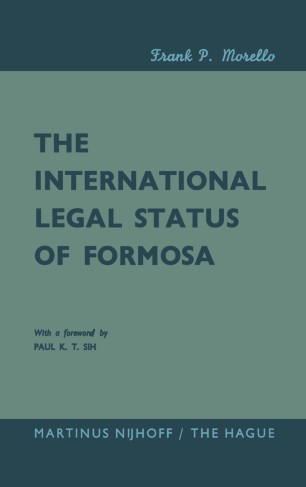 The International Legal Status of Formosa

Can two-Chinas co-exist in the present world order? In a sense they co-exist now-Free China in Taiwan (Formosa) and Communist China on the mainland. Barring a military showdown, this situation could remain for years to come. However, if we seek to put Free China and Communist China on some permanent basis and give them interna­ tional juridical status as abiding and separate entities, then we are faced with serious difficulties. Free China and Communist China co­ exist at present simply because neither can effectively alter the situa­ tion. Each is backed by a power bloc that recognizes the legal existence of only one of these political regimes. The United States does not re­ cognize Peiping, even though it has conducted meetings on the ambas­ sadorial level with the Regime for several years. In a corresponding way, the Soviet bloc of nations refuses to recognize Nationalist China. The situation is very similar to that of two-Germanys, two-Koreas and two-Vietnams. To seek a solution to this political impasse, it is suggested that a "Sino-Formosan State" or some kind of "self-determination" by the Formosans be instituted. This was first expressed by Chester Bowles in his article "The China Problem Reconsidered" (Foreign Affairs, April 1960), and supported by John Carter Vincent in his letter to the editor of the New York Times (December 7,1961). The Conlon Report of 1959 held the same posi. tion. Also, Arnold J.