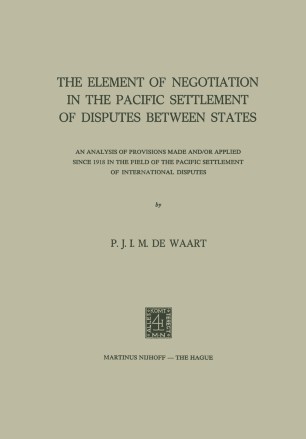 The system of the pacific settlement of disputes contained in the United Nations Charter - confirmed in 1970 in the Declaration on Principles of International Law concerning Friendly Relations and Co-operation among States - is based on agreement between the parties on both the method to be applied and the acceptance of its results. From the juridical point of view states are free in this system to establish in advance their choice of the appli­ cation of one or more methods to a dispute and their willingness to accept the result in respect of all or certain groups of disputes or only to determine their choice when a dispute arises. The functioning of the International Court must be regarded in this light. The practice of pacific settlement shows that there is not too great a distance between the standpoints of the Soviet countries, who emphasise direct negotiation as the starting point in settling disputes, and that of the Western countries, who lay particular stress on judicial settlement as such, because the Western countries usually make the application of arbitration and judicial settlement to a specific dispute dependent on the cooperation of all parties, in obtaining which negotiations are essential.