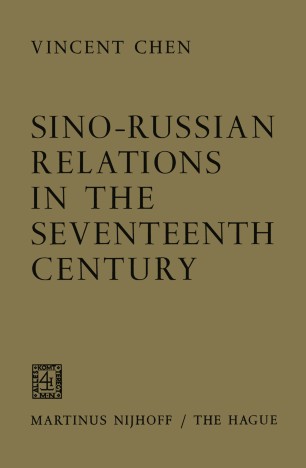 Sino-Russian Relations in the Seventeenth Century

The seventeenth century was a momentous epoch. While western European countries were busy expanding westward and eastward, Russia, quietly crossed the Ural Mountains, absorbed Siberia and reached as far as Alaska. Russia did not expand toward the East with­ out opposition from the western European countries. In the last half of the sixteenth century, inspired by the "gorgeous East," the Dutch and the English made many efforts to find a northern passage to China l to attain gold, gems, silks, pearls and spices. They attempted to reach China by land routes but were hindered by continual wars between the Kazaks and Mongol tribes, as is indicated in a letter written by an 2 English traveler, Jenkinson, in 1559. They also attempted to reach China by way of the Northern Ocean, but the Arctic weather foiled all of these efforts. The English hoped to find a way to China as well as to India by the Ob River. They knew of the Ob as early as 1555, and the next year Stephen Burrough was sent to find it. He reached the Kara Strait but ice prevented him from passing through it. In 1580 Arthur Pet and Charles Jackman left England with two ships in search of a northeast passage. Pet went through the Kara Strait. Jackman followed him in 1581, encountering much ice. Eventually Pet's expedition succeeded in returning westward again through the Kara Strait, but Jackman and his men were never heard from again.