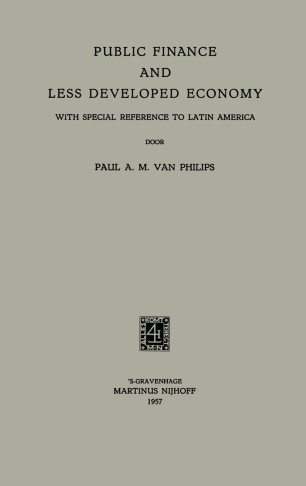 With Special Reference to Latin America

Since the end of the second world war special international interest has been devoted to the economically' underdeveloped countries. The question is, in what way can the welfare of these societies be rapidly increased and their standard of living raised. An enormous volume of literature on this subject has been published in the last decade and many international organi­ zations are engaged upon the study of the problem, which - to quote VAN BEUKERING - resolves itself into as many problems as there are underdeveloped areas 1. Much fruitful work has already been done in this field, and in some of the countries concemed the old economic tree has already put forth a few fresh shoots. Yet the problem of development in general is no new dis­ covery. Development in the sense of differentiation and speciali­ zation of man and forms of society 2 has, of course, always existed. The relations between human beings are reciprocal, as are those between nations. This reciprocal relationship is one of the most important characteristics of colonization, which is an expansion of social rather than of territorial boundaries.