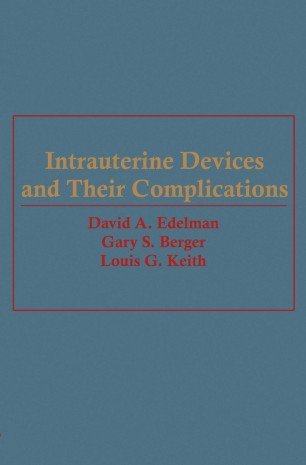 Intrauterine Devices and Their Complications

In Memoriam xiii Preface xvii Chapter 1 Development, Mechanisms of Action and Evaluation of IUD Performance 2 Chapter 2 IUD Insertion 28 Chapter 3 Uterine Perforation 54 Chapter 4 Pelvic Inflammatory Disease 92 Chapter 5 Bleeding 138 Chapter 6 Cervical and Uterine Pathology 158 Chapter 7 Intrauterine Pregnancy 172 Chapter 8 Ectopic Pregnancy 194 Chapter 9 Return to Fertility after IUD Discontinuation 222 Chapter 10 IUD Complications in Perspective 232 Appendices 243 Index 253 Foreword Ever since Hippocrates observed that foreign bodies placed in the uterus would help to prevent pregnan­ cy, periodic interest in this information and its use has resulted in attempts to control unwanted fertil­ ity. Prior to the 1900s, this interest was somewhat episodic. Because of anxiety about infection, early attempts flourished only briefly and then were no more. In the twentieth century, however, as a result of renewed interest in intrauterine contraception, particularly in the developing countries, a number of individuals throughout the world began experiment­ ing with a variety of new intrauterine devices. Since then, a great number of these devices have been studied; a few have survived careful scrutiny, and IUDs now represent the second most commonly used form of medical contraception. It is estimated that approximately 15 million devices are in use at the present time, 3 to 4 million of them in the United States.