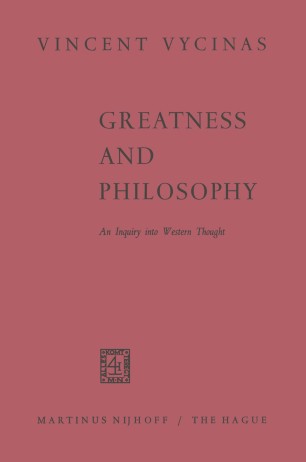 An Inquiry into Western Thought

The present study is not a series of disconnected essays concerning select­ ed Western philosophies. All its parts belong organically together and constitute one whole. For this reason, the reader is warned not to use it as a reference book for one or another philosopher here treated. The study begins with the declaration of the exposition of fundamental event in Western philosophy which prevails with a different hue in each of the major philosophies and which relates these to pre-philosophical or mythical thought. The study then treats selected Western philosophies se­ parately with the tendency to disclose the major event of philosophy in them. Finally it approaches contemporary man from the perspective of the fundamental event in philosophy. An inquiry into Western man's greatness is maintained here all along as intimately bound up with the historical development of philosophy. Philosophy involves greatness - not one of many philosophies, how­ ever, but Philosophy as such. Philosophy as such is not a composite of the various major philosophies in history; it precedes these, and is present in each one of them in a concealed way. It holds sway over them, and they belong to it. Philosophy rules the thought of thinkers; it is the Ordinance which directs the way of thought, and which is responded to by the thought of the thinkers. In this way, the major philosophies in history are diverse phases which, like the bends and turns of a river, belong to Ordinance - to Nature's thought.