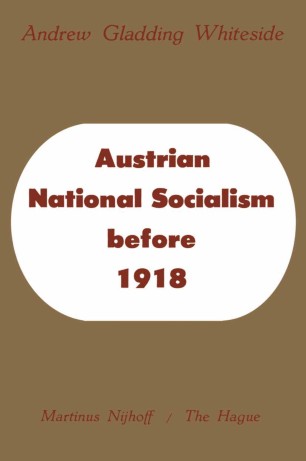 This book is an account of the emergence of a National Socialist party from the German nationalist labor movement in the multi­ national Austrian empire. Made up of unions chiefly concerned with protecting workers of German nationality from the competition of cheap Czech labor, the German nationalist labor movement was strongest in Bohemia, where the rivalry between Czechs and Germans in the labor market was most acute. Much of Austrian industry was in northern Bohemia, and as it expanded in the latter half of the nineteenth century large riumbers of Czechs moved from the countryside into the industrial centers. Many German workers were displaced by the Czech immigrants, who were accustomed to lower standards of living and therefore willing to accept lower pay. The anger of the German workers developed into an intense hatred of the Czechs, the Czechs resented German domination, and as a result of the mutual enmity, the Socialist international unions split into German and Czech sections. Some of these became separate German and Czech nationalist unions. Other German nationalist unions grew out of the protective associations that were organized by gro. ups of German workers against the Czech danger. Around the turn of the century the leaders of some of the more militant German nationalist unions decided that they could further the members' interests more effectively if the unions were affiliated with a political party under their own control: collaboration with radical nationalists had proved disappointing.