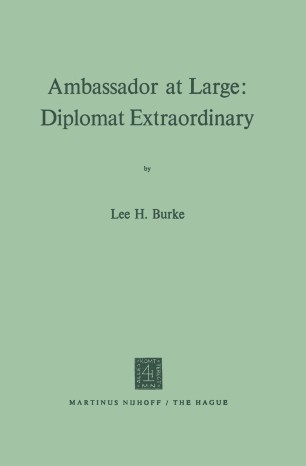 A mbassador at Large: Diplomat Extraordinary is a welcome contri­ bution to the literature on contemporary diplomacy, and is especially relevant to the conduct of United States foreign relations. Concomitant with pressures to escalate the level of diplomatic representation and negotiation, the Ambassador at Large, a recent innovation in the American diplomatic hierarchy, may play an increasingly important role. Should other governments follow the American lead by creating similar offices, a new, flexible layer of diplomatic relations may be added to the four which currently are most widely used, namely, the summit, the ministerial, the traditional professional, and the technical strata. Diplomacy may be defined as the international political process whereby political entities - mostly the recognized members of the fami­ ly of nations, but also emergent states, international and supranational organizations, and a few special entities like the Vatican - conduct their official relations with one another in the international environ­ ment. Like other human and societal processes, it is astatic and in the course of time experiences significant changes. It has expanded to meet the needs of a rapidly proliferating community of nations and it has been adapted to the growing complex of international concerns and interactions. Scientific and technological changes have created new problems and revolutionized methods of diplomatic communication and transportation. These developments have both intensified the needs and enriched the potentialities of the diplomatic process. Throughout history doubtless each major, permeative modification in diplomatic practice has produced a so-called "new diplomacy.