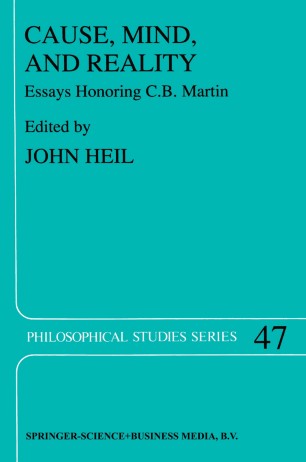 Cause, Mind, and Reality

T is said that there is no progress in philosophy. The illusion of standing I still, however, arises only when we lose sight of our history and so fail to notice the distance we have travelled. Philosophers nowadays find obvious ideas and themes that, as it happens, emerged slowly and painfully and largely in reaction to prevailing sensibilities. The essays here honour a man to whom present-day philosophy owes much: Charles Burton Martin. In reflecting on my own on-going and somewhat chaotic philosophical education, I find considerable evidence of Charlie Martin's influence. After departing graduate school, one of the first papers I succeeded in publishing consisted of an attack on Martin and Deutscher's 'Remembering'. ' After that, Charlie more or less vanished from my conscious awareness until the winter of 1985, when we appeared together in a colloquium at the Eastern Division meetings of the American Philosophical Association. Although Charlie was nominally a commentator on a paper I was delivering, his 'comments' contained more philosophy and went considerably beyond the tentative and highly circumscribed thesis I had elected to defend. Whereas my focus had been on a tiny feature of Hilary Putnam's argument against realism, Charlie went straight for the jugular, addressing matters that immediately took us into deep water.