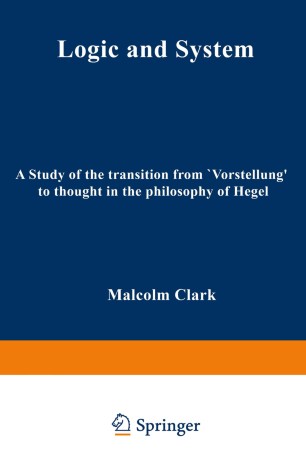 This book will examine one of the oldest problems in understanding what Hegel was trying to do. What is the place ofthe Logic in the Hegelian system? That is, how did Hegel see the relation between "pure thought" and its origins or applications in our many forms of experience? A novel approach to this old question has been adopted. This book will study Hegers account of what he regarded as the dosest "illustrations" of pure thinking, namely the way we find our thought in language and the way philosophieal truths are expressed in religious talk. The preface will indicate the problem and the approach. The introduction will examine three recent works on Hegel and suggest how they invite the sort of study which is pro­ posedhere. of all wisdom, a time There was a time when Hegel was read as the source also when he was treated only as an occasion of ridicule. Both are now past. The attitude of metaphysicians is more cautious, that oftheir opponents more receptive. Each side is better prepared to allow those who hold an assured place in the history of philosophy to speak for themselves and reveal their achievements and their limits. In this atmosphere there is special reason, on both sides, for the study of Hege!. No one has made such extreme claims for metaphysical thought and developed it so extensively and systematieally. No one has demanded more from posterity in the criticism of such thought.