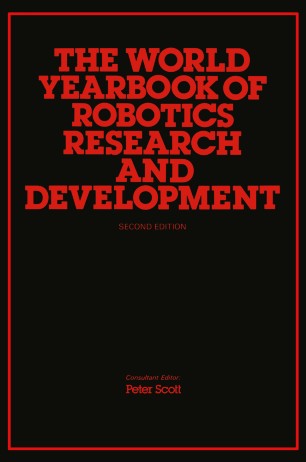 The World Yearbook of Robotics Research and Development

How quickly the technological 'flavour of the month' changes. At the beginning of the 1980's many saw 'robotics' as being something of a pana­ cea for those problems in the manufacturing industries which had been exacerbated by the world recession. Those working at the time in the field of robotics stressed that robots themselves were only part of the solution. Yet in many quarters the 'hype' for the new technology apparently knew few bounds, resulting, inexorably, in many industries painfully discover­ ing for themselves a new realism, closely followed by disillusionment. In its wider sense the term 'robotics' covers an extremely broad spec­ trum of technologies ranging from extremely flexible, highly sensory and integrated systems capable of handling a very diverse product range, through to comparatively inflexible, high volume systems which can merely handle slightly different variations of the same basic product. As a result of the one 'buzzword' referring to such a variety of actual system­ types, the disillusionment which started to become apparent during the early 1980's acted as something of a double edged sword. A given com­ pany might consider a particular robotics-based technological solution to its production problems, find that it was unsuitable, and so renounce all robotics approaches as inappropriate. Yet just because one position on that spectrum of technological solutions was unsuitable for the company should not have led them to assume that there was no other robotics solu­ tion that was appropriate.