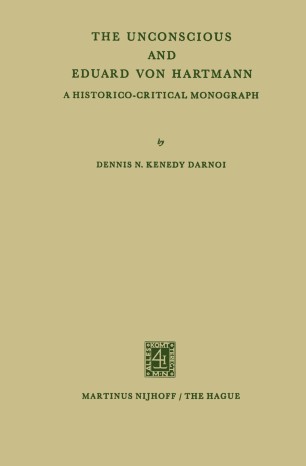 The Unconscious and Eduard von Hartmann

No man can live without ideas, for every human action, internal or external, is of necessity enacted by virtue of certain ideas. In these ideas a man believes; they guide his actions, and ultimately his whole life. Study of these ideas and principles is one of the distinctive tasks of the history of philosophy. But were we to restrict the field of interest of the history of philosophy to a mere detached academic "cataloguing" of past ideas, the history of philosophy itself would have joined long ago the interminable line of barren catalogued ideas. The study of the wisdom of past ages, however, is very much alive. Not only is it alive, but in the words ot Wilhelm Dilthey: "What man is, he learns through history. "l Thus, the culture of every generation is inevitably related, whether thetically or antithetically, to the previous one, and the politi­ cal and economic struggles of any present are always the consequences of an earlier and perhaps even fiercer battle of ideas. I t is imperative to know the history of the philosophies that nourish the present if we wish to know ourselves and the world about us. The Socratic call to self-knowledge is as indispensable a condition of a truly human existence today as it was in the fifth century B. C.