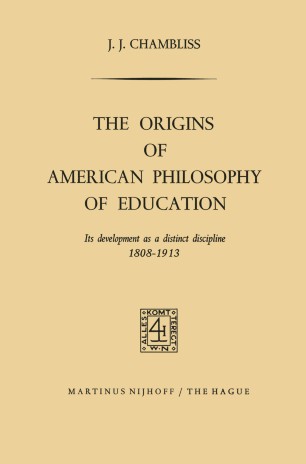 The Origins of American Philosophy of Education

John Dewey once wrote: "Education is such an important interest of life that . . . we should expect to find a philosophy of education, just as there is a philosophy of art and of religion. We should expect, that is, such a treatment of the subject as would show that the nature of existence renders education an integral and indispensable function of life. " Indeed, such treatments of education are at least as old as Plato's Republic. Even so, it was not until the nineteenth century that the philosophy of education was recognized as a distinct discipline. His­ torically, it has been one thing to treat education in such a manner as Dewey mentions; it has been another thing to do so while deliberately making explicit a discipline with a subject matter which is in some sense distinct from that of other disciplines. The aim, in the present study, has been to study the origins of philosophy of education as a distinct discipline in the United States. In doing so, "origins" are taken to mean, first, that from which the disci­ pline has come, and second, that which initiates, serves as a point of departure for what follows. In searching for origins, I have explored the philosophic considerations of education from which came those distinct conceptions of the philosophy of education that were to serve as points of departure for later considerations of the discipline.