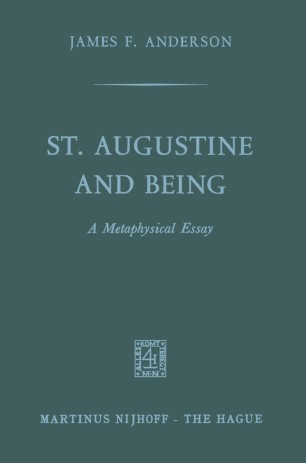 St. Augustine and being

The properly metaphysical dimension of Augustine's thought has received little special attention among scholars - even "Scholastics. " The Thomist metaphysicians - especially we "Anglo-Saxon" ones - receive first honors for being the most neglectful of all. Why? I t is a puzzling phenomenon particularly in the light of the fact (recognized by almost every Thomist) that the very existence of Thomas the theologian is inconceivable apart from his pre-eminent Christian mentor in the intellectual life, the Bishop of Hippo. It is a puzzling phenomenon because, although the Christian metaphysics of Thomas Aquinas is not the Christian metaphysics of Augustine, these metaphysics could not be simply opposed to one another, else the theologies wherein they exercise the indispensable function of vital rational organs would themselves be discordant. But what respectable "Scholas­ tic" would deny that, in their essential teaching about God and the things of God, the thought of these two masters is remarkably congruent? May I suggest that one of the major reasons for this paradoxical neglect of Augustinian metaphysics on the part of Thomists (above all, in the English-speaking world) is their simplistic assumption that whereas Aquinas was an Aristotelian in phi­ losophy, Augustine was a Platonist, despite the fact that in theology they were substantially at one - as if there could be theological agreement, formally speaking, even where there is metaphysical disagreement, formally speaking.