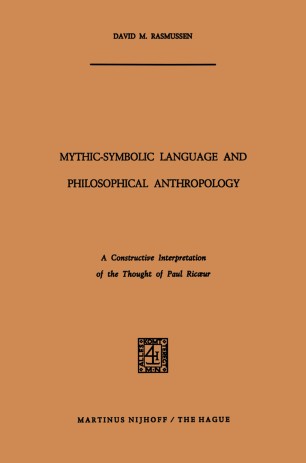 A Constructive Interpretation of the Thought of Paul Ricœur

This book will attempt to achieve a constructive and positive correla­ tion between mythic-symbolic language and philosophical anthropolo­ gy. It is intended as a reflection on the philosophical accomplishment of Paul Ricoeur. The term mythic-symbolic language in this context means the language of the multivalent symbol given in the myth with its psychological and poetic counterparts. The term symbol is not con­ ceived as an abstract sign as it is used in symbolic logic, but rather as a concrete phenomenon - religious, psychological, and poetic. The task inherent in this correlation is monumental when one considers the dual dilemma of problematic and possibility which is at its heart. The prob­ lematic arises out of the apparent difficulty presented by the so-called challenge of modernity which seems to require the elimination of my­ thic-symbolic language as an intelligible mode of communication. Mythic-symbolic language is sometimes eliminated because in a world molded by abstract conceptualizations of science, such a language is thought to be unintelligible. The claim is that its "primitive" explana­ tions have been transcended by our modernity. Others believe that the problem of mythic-symbolic language is the problem of the myth. If the mythic forms of language could be eliminated, the truth of such language could be preserved through its translation into an intelligible mode of discourse. The problematic is heightened further by the relation of consider­ ations of language to philosophical anthropology. Any consideration of language involves a related view of the nature of man.