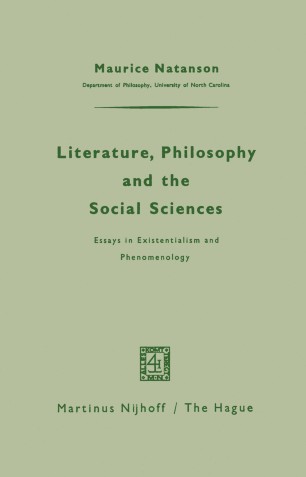 Literature, Philosophy, and the Social Sciences

Essays in Existentialism and Phenomenology

A collection of one man's essays in book form tends to be viewed today with some suspicion, if not hostility, by philosophical critics. It would seem that the author is guilty of an academic sin of pride: causing or helping to cause separately conceived articles to surpass their original station and assume a new life, a grander articulation. It can hardly be denied that the essays which follow must face this sullen charge, for they were composed at different times for different sorts of audiences and, for the most part, have already been published. Their appearance in a new form will not allay commonplace criticisms: there are repetitions, certain key terms are defined and defined again in various places, a few quotations reappear, and, beyond this, the essays are unequal in range, depth, and fundamental intent. But it is what brings these essays together that constitutes, I trust, their collective merit. Underlying the special arguments that are to be found in each of the chapters is a particular sense of reality, not a thesis or a theory but rather a way of seeing the world and of appreciating its texture and design. It is that sense of reality that I should like to speak of here. Philosophy stands in a paradoxical relationship to mundane ex­ istence: it is at once its critique and one of its possibilities.