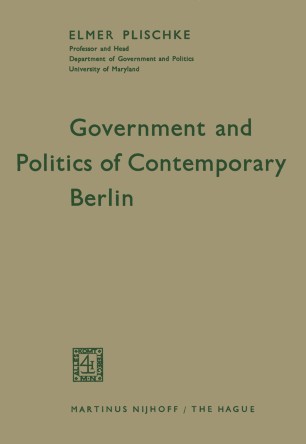 Government and Politics of Contemporary Berlin

Berlin lies more than 100 miles behind the Iron Curtain within the Soviet-occupied zone of Germany. It is not, however, part of that zone. It is a separate political entity for which the four major allies of the war against Nazi tyranny are jointly responsible. Its special status stems from the fact that it was the capital not only of Hitler's Third Reich but of the German nation formed in the latter half of the 19th century. In essence, the four major allies agreed to hold Berlin, as the traditional capital, in trust for a democratic and united Germany. United States, Department of State Berlin-I96I (1961) The division of Germany, and with it the bifurcation of its one-time capital - Berlin - has produced one of the foremost political contro­ versies of the mid-twentieth century. There has long been a "German problem," and volumes have been written concerning the history and culture of the country, the Nazi era and World War II, the Allied occupation, and recent political and economic developments in Ger­ many. Yet, the "Berlin problem" - as part of the broader German question - is historically of the current era.