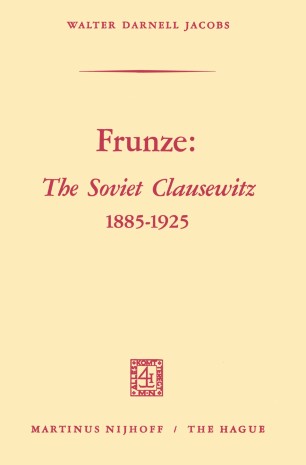 Alongside the names of such giants of Soviet history as Brezhnev, Khrush­ chev, Kirov, Kosygin, Lenin, Stalin, and Trotsky, the name of Mikhail Vasil'evich Fronze may seem to be out of place. In spite of a most impres­ sive flowering of Western scholarship on various aspects of the Soviet Union, the figure of Fronze remains relatively undeveloped. It is, in fact, quite possible to produce a history of the Soviet Union in which he is not 1 mentioned. It has been done several times. The Western neglect of Fronze is not duplicated in works produced in the Soviet Union. There, Frunze is almost invariably treated as a major figure and is popularly regarded as one of the great strategists of the early days of the Soviet republic. He holds, as well, a high place in the ranks of the "Old Bolsheviks. " How are these constrasts between the Western and the Soviet scholarly positions to be explained? Several factors account for the high position occupied by Frunze in Soviet historiography. He was a military hero. He had a long record of revolution­ ary activity. He died at an early age and did not become involved in the purges and other excesses of Stalin's later career. In short, Frunze's short, active life and his contributions to the revolution suited him almost ideally to the role of historical hero. Western scholars have neglected him, probably, for a number of reasons.