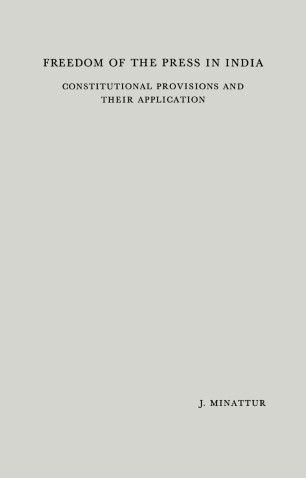 Freedom of the Press in India

Constitutional Provisions and Their Application

This study is intended to present to the reader the main provisions of law affecting freedom of the press in India. It is specially concerned with examining how far freedom of the press obtains in free India. I t is proposed to discuss constitutional provisions and their application through various legislative measures with a view to seeing whether these provisions are sufficiently protective of this freedom. The intro­ ductory chapter attempts to indicate what is meant by freedom of the press. In the first chapter constitutional provisions are set out and discussed. The next five chapters deal, in the main, with statutory provisions relating to this freedom. The concluding chapter purports to make certain suggestions in relation to repeal or amendment of a few of these provisions. It may be mentioned that this study deals only with freedom of the press in normal times. The subject of civil liberties in India during a period of emergency has been dealt with in the present writer's doctoral thesis, Emergency Powers in the $tates of Southern Asia (London Uni­ versity, 1959) In the preparation of this study, I have benefited from the guidance and encouragement given by several persons and the assistance and facilities provided by various institutions. I wish to express my thanks to all of them.